Then and now: Nakiska

Then and now: Nakiska

When Calgary won the bid in 1983 to host the 1988 Winter Olympics, Mount Sparrowhawk and Mount Shark in Kananaskis were prime candidates for the alpine events. The Alpine race committee however, was not convinced the two mountains, 152 kilometres from Calgary, met all the requirements. It took 14 precious months but they eventually decided to use Mount Allen, one peak east of Sparrowhawk. 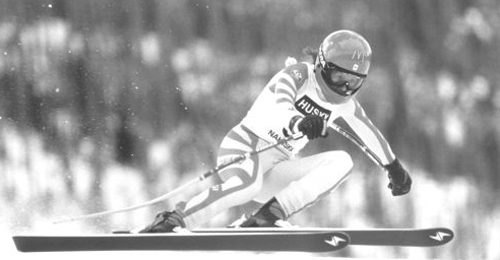 Laurie Graham during the Husky World Cup at Nakiska in 1987.
Photo by Alpine Canada

Mount Allen had more going for it. It was closer to Calgary, it met the technical standards of the FIS (International Ski Federation) and already had roads and utilities in place. It also had potential to be used recreationally after the Olympics. If it went as planned, it would be the first time that all alpine events for the Olympic Games were held on one slope - a distinct advantage for the organizers.

In 1985, two years after work started on the slopes, the mountain was renamed Nakiska, a Cree word for “Meeting place.”

When the resort opened for skiing in the fall of 1986, it had three chairlifts (brilliantly named Bronze, Silver and Gold) and 30 runs. Above the Gold triple chair, the Olympic Platter was temporarily installed solely for the purpose of taking competitors and race officials to the top of the men’s downhill. (It was removed after the Olympics to minimize environmental impact on the resident herd of Bighorn Sheep.)

That winter was critical for the Olympic Committee. They still had to impress the FIS by hosting World Cup races that season. If the slopes and courses couldn’t pass the test, the FIS athletes would not attend the Olympics and the prestigious downhill races would be a joke. Natural snow was sparse but the snowmaking machines kicked in and the races were a success. 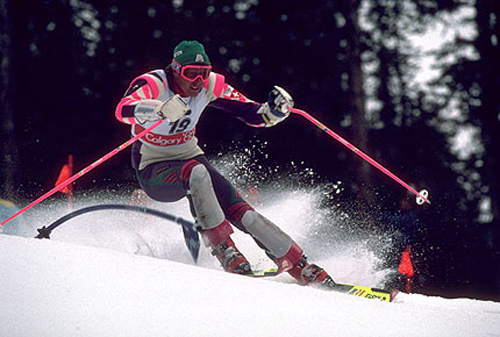 A skiier races during the Calgary Olympics.
Photo by the Ski Museum

The nod of approval from the FIS was granted and the Olympics could follow in two years. Before that however, another chairlift, the Olympic Chair, was constructed mainly to accommodate spectators who needed a lift to the finish line of the slalom events halfway up the mountain. Adding that lift brought building the resort cost to $27.3 million.

Counting on natural snow was not an option. To make sure the Olympics would go off without a glitch, over 30 km of pipe, 246 snowmaking hydrants and 152 litres of water per second running though those pipes would spray snow to cover 75 per cent of the ski runs and 100 per cent of the Olympic courses. Human error can always create that glitch though.

A snowmaking gun left spraying all night left a massive drift on the ladies downhill course. The grooming machines were needed on another race so every available volunteer dug in and dug out the drift. An ingenious snow chute was created on-site using a long plastic tarp. As some crew shovelled the snow onto the tarp, others directed the flow of the crusty snow off course. It was a brilliant show of how dedicated the volunteers were. The training run went on as planned. Phew!
All the alpine races went as planned. OK, the wind did postpone a few, but all-in-all it was perfect. To top it all off, Karen Percy, of Banff, AB., stole the show and won the bronze in the Ladies Downhill and the Super G.

When Juan Antonio Samaranch, International Olympic Committee president, declared at the closing ceremonies that the Calgary Olympics was “the most successful Olympic Games ever,” Nakiska focused on becoming a recreational ski resort for the entire family to enjoy yet it still appeals to the world-class skier. In 2008, Nakiska was named Official Alpine Canada National Training Centre and alpine teams from around the world use Nakiska for early season ski training.

Nakiska offers some incredible views of the Canadian Rockies.
Photo by the Nakiska Ski Area

Upgrades since the ’88 Olympics have included more runs and upgrades to the chairlifts. In 2009, big changes included the new Gold Chair Express, replacing the original fixed-grip triple chair. It now carries enthusiasts to a north-facing slope called The Monster Glades. In all, there are three high- speed quad chairs, one double and two magic carpets. There are 71 marked runs with the bulk of them aimed at intermediate skiers. The terrain park is re-designed every year to keep the shredders on their toes. And to keep everyone on their butts, there is a tube park near the resort base.

The day lodge offers cafeteria-style food but there are plenty of options. Enjoy a foot long Monster Hot Dog at the BBQ Pit at the base or stop at the mid-mountain lodge at the top of the Olympic Chair and enjoy your lunch on the deck. Après ski has to be at the Finish Line Lounge where a selection of poutine awaits.

Ski on down to the day lodge for amazing food and drink.
Photo by the Nakiska Ski Area

With the Delta Kananaskis Hotel only moments from the base, it’s the perfect weekend get-away yet only 45 minutes from the edge of Calgary.

The spirit of the Olympics still lives on at Nakiska. Yes, the chair lifts are still Bronze, Silver and Gold but more importantly, the Olympic flame still burns at the entrance to the resort.

For more information about, head to the official Nakiska ski resort website

Learn about Canyon Ski Resort, a year-round community hub of fun in the heart of Alberta.

Show your stoke for the awesome history of Nakiska by sharing this page with your friends!

For more stories and detail on Canmore check out our SnowSeekers' destination page.