Skiing Green to Blue to Black – All in One Day

Are you new to Canada and ready to enjoy winter and learn how to ski or snowboard? Our #NewSkiAB series of stories, videos and photos will inspire you to get out on the slopes with your friends and family. Use #NewSkiAB to tag us as you experience Alberta’s winters.

Any snow day is a fantastic day for Joyce Ou. Just a few short years ago that was not the case but that all changed when she started skiing and snowboarding.

Ou, 30, now a permanent Canadian resident, moved to Canada from a tropical region of China to attend university in Calgary. Initially, she dreaded snowy, cold days. But once she took up skiing and boarding her attitude shifted a complete 180.

Ou usually gets out on the slopes five times a year because of work commitments, but this year she decided she wanted to up her game.

Learn more about new skier and boarder programs at Nakiska

The added bonus of skiing, she says, is that it allows her to hang with her friends and family and Nakiska is just a short drive from the city. “We drive out together, we ski together. It’s so much more fun with people that I know.” But she's also made new friends because of skiing.

Photographer: Karl Lee
It was Ou's favourite kind of snowy day for trying some more challenging terrain at Nakiska.

In fact, her friend Coco Yuen, who gets out skiing more often than Ou, encouraged her to take a lesson this year – also the first year she’s bought a Nakiska season’s pass because of all the good snow – to help her progress beyond skiing green runs.

That’s where Nakiska instructor, Luca Jelley who has been teaching for three seasons, came in, helping Ou build the confidence to tackle her first-ever black run. Going into the lesson that day, Ou thought she’d at least ski a blue run, but when instructor Luca Jelley got them on a “steep” black run, Ou surprised herself, even if she was a bit hesitant at first.

“Because I have been skiing for a long time, I thought I can just have some refreshers and go from green to blue, - but I made it to black!”

The only fall she had, she brushed off because the snow was coming down in buckets and it was a soft landing.

She attributes Luca’s instruction, who added new skiing techniques incrementally each time they attempted a steeper slope. “He’s a good instructor,” Ou says. “I was super happy about it. He is quite patient, and he demonstrates a lot of examples and we followed along.”

“Joyce did amazingly well in our lesson the other day,” said Jelley. “The progress we made was very significant, starting from short green runs on the easiest chair, to heading up the mountain into the experts-only area and skiing one of our hardest black runs.”

Photographer: Karl Lee
Ou says the best part of skiing is that it lets her hang out with her friends.

Jelley’s strategy for teaching people comes from his own learning experiences and also understanding how the skis work on snow. “Once you can understand the physics behind skiing and why we need to do the actions we do, it makes it a lot clearer and easier to try for yourself.”

He says Ou just needs to keep practicing and keep pushing herself outside her comfort zone as she did during her lesson.

Ou has aspirations to get even better. “Yeah definitely, we’re going to practice more and I’m hoping I can go into trees and moguls.” Because besides the fun she has with her friends on the hill, she loves being out in the mountains. “I’m a nature person; I enjoy a peaceful environment.”

For anyone who’s thinking about taking up snowboarding or skiing, you just have to ask Ou what she thinks. “People who are afraid of falling, so join a class, pick a powder day so when you fall you don’t’ get hurt.”

Want to take a lesson?

SnowSeekers’ #NewSkiAB can get you and your significant other or you and a buddy on the slopes for your first lessons at Lake Louise. Sign up today for private ski or snowboard lessons at Nakiska and up those skills and your love of winter. There are lots of spaces available.

SnowSeekers is stoked to partner with HEAD Skis, Lake Louise Ski Resort and our friends at Immigrant Services Calgary. A legacy of our #Calgary2026 work, we’ve formed this #NewSkiAB partnership, helping to welcome more diversity to Western Canada’s slopes. Check out this story about another new Canadian getting energized by learning to snowboard.

Looking to up your ski or snowboard game? Nakiska has a program for you. 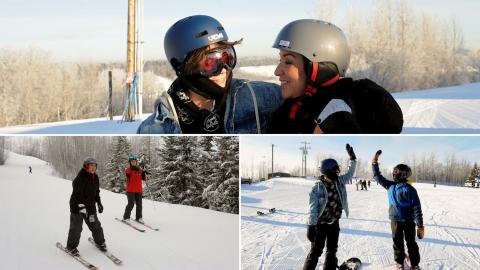 Bridging the Gap at Nitehawk

A nervous grin spreads across Ginger Dumais’ face as she picks up speed, reaching the edge of... 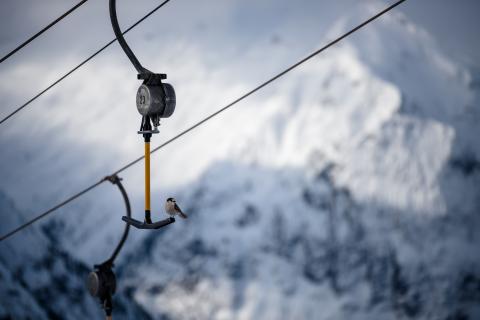 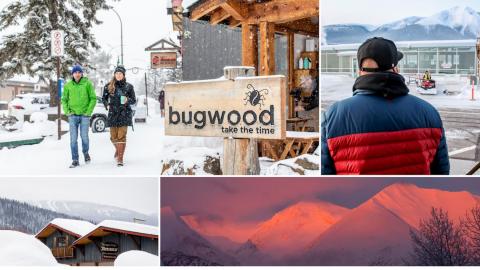 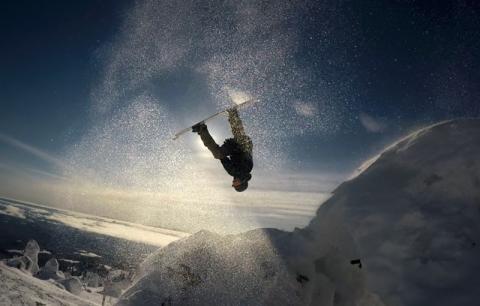 Snow: What is this stuff anyway?

It's no surprise that snow is our favourite topic - after all, we are #SnowSeekers. But how well do... 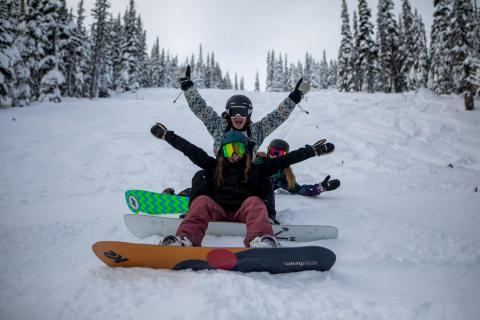 Welcome to winter in the wide-open spaces of Northern Alberta, which are sure to bring you joy.