Fernie after hours - nocturnal on the mountain

FERNIE, BC - Like many who have experienced Fernie’s gregarious culture and nightlife, I’ve seen the right side (or is it the wrong side?) of 3 a.m. However, a recent visit to the home of “Legendary Powder” prompted me to wake upshortly after 3 a.m. to get a glimpse of Fernie’s nocturnal mountain activity.

As skiers and riders clamber to the lifts for a 9 a.m. ski day start, the resorts we have the opportunity to ride have already been groomed, bombed and prepped for hours prior.

Ever wonder what goes on?

The art of grooming

Shortly before 4 a.m., I make my way over to Fernie’s base area, a typically bustling place that stands eerily dark and quiet in the depths of night.

Within moments, a large, lumbering snowcat emerges from the trees near the Deer Chair, ready to pick me up. We secure my skis to the front of the cat, and I climb up the large metal teeth of the rig inside, where I arrange myself in the surprisingly comfortable passenger’s seat and am greeted by snowcat operator Blair Craig. We make our way up to the darkness of the mountain, the cat’s powerful lights illuminating the slopes waiting to be groomed.

I instantly feel at ease with Blair, who has worked on the mountain for the past 37 years, 26 of those as a groomer. Fernie is blessed to have a crew of dedicated team members who have worked at the mountain for decades, and know every inch of the mountain and how it responds to the more than 37 feet of snow it receives every year.

“Every night, there are two shifts who collectively put in 80 hours of grooming on the mountain,” explains Craig, over the hum of the 350- horsepower rig.

“One team composed of five rigs works from 4 p.m. to midnight, then another crew comes on from midnight to 8 a.m. There’s a lot of terrain to cover, and we focus on making the slopes great in any type of condition and weather.”

Listening to classic country tunes and climbing up the mountain, we see a winch cat perfecting the corduroy on the Bear run for the next morning’s first tracks skiers. Winch cats anchor to an underground cable to help them safely maneuver up and down steeper vertical.

Craig spots what could be bobcat tracks next to the trail - the mountain often comes alive at night with occasional deer, elk, coyote, rabbit, bobcat and lynx sightings. Down below in the valley, the lights of the town of Fernie glow beneath the iconic peaks of the Elk Valley. I’m taken aback at how peaceful and stunning the mountain is at night.

Ongoing heavy, wet weather has softened the snow in early spring, and several of the rigs are making a second pass over the mountain now that the skies have cleared to ensure the runs are the best they can be.

“On some Friday nights, from up here you can see a steady stream of headlights coming up the highway to town and the mountain,” says Craig. “That definitely encourages us to work hard and make the mountain perfect, knowing there’s so many people eager to get up here and ski the next day.” Now that’s dedication.

The science of snow

Shortly before 6 a.m., things really start to pick up on the snowcat radio. Blair gets a call from the snow reporter, where he relays the list of runs that have been groomed over the course of the night. Soon, patrol is also on the radio, getting an update from the grooming crews about the conditions on the mountain, to help them forecast and plan for the day’s control activities, as well as determine the best access routes up the mountain.

Blair drops me off at the top of the Bear chair a little after 6 a.m., where the first patrol crews of the day are evaluating the weather, wind, snowfall and precipitation. Today, the snow is heavy and the snowpack is deep; Fernie’s signature headwalls must be closely monitored on a daily and sometimes hourly basis.

I head up to the avalanche gun tower with senior avalanche route leader Steve Ruskay and ski patroller Butch Folland. They quickly get to work, evaluating which areas should be tested and triggered to help persuade some of the sticky headwall snow above Lizard Bowl and Cedar Bowl to come down.

“The headwall is divided into a number of avalanche starting zones, and various charts in the gun tower indicate the azimuth (bearing), angle and pressure that should be used for accuracy,” says Ruskay, “The gun itself is pressured by nitrogen, which provides the propellant to place the explosive safely.”

Shortly after 7 a.m., Fernie’s famous snow day “booms” start to echo through the valley, stemming from the explosives being set off by patrol in the gun towers.

The snow on the headwall is sticky and stubborn, but a final blast to the Griz Face brings down a powerful powder snowfall on the cliff slope, alleviating the pressure of the snowpack above and below.

Despite their best efforts, there will still be some closures for the day, with patrol taking care to keep skier safety the first priority.

Says Ruskay, “The results of the ava-launcher gun shoot is just one way of determining the avalanche hazards for the day and making decisions regarding closures and skier safety.”

Today the hazard is listed as high.

At around 7:30, the liftees are on site and the whirring of the Bear Chair motor starts up; the radio is constant chatter as the departments work in collaboration to get the mountain open. Just prior 8 a.m., ava-launcher control wraps up as a large group of eager first tracks skiers prepare to load.

I meet up with the first tracks group at the top of the mountain shortly after 8 a.m., their eagerness evident from their grins and laughter. They think they are the first to “arrive” - but the start of their ski day is the end of a work day for so many others who tirelessly manicure Fernie’s powder slopes each and every day.

As I make my way down the fresh, unbroken groomed snow of the Bear run amidst the hoots and hollers of the happy first trackers, I take a moment to appreciate the work done all night long by the teams to make the mountain just right, only to be quickly cut up by my ski turns. I smile, knowing that today, I might be appreciating it all a little more than the rest. 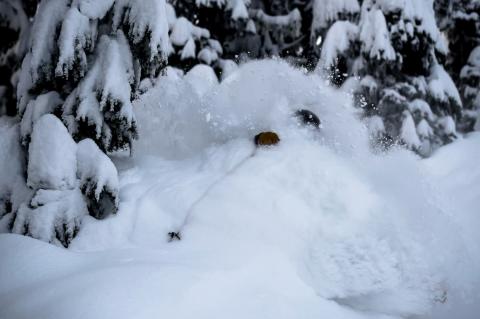 FERNIE, BC — Quite often, the most sought after accommodation in any ski town is something slopeside... 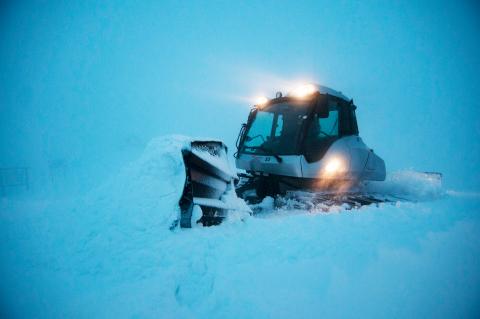 FERNIE, BC — As a Canadian I am very invested in beer (I’d suggest it's a bond that ties us as... 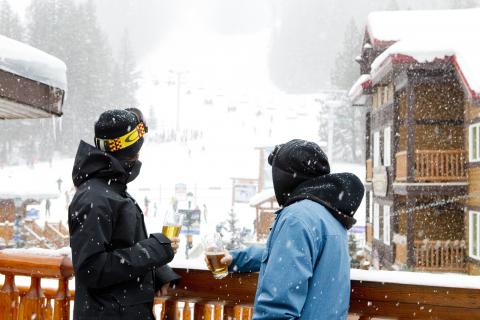 Endless pow, friends and apres add up to the perfect day at Fernie