Then and now: The Lake Louise Ski Resort

Lake Louise - the birthplace of skiing in Canada

From yesterday’s lace-up boots to today’s high-speed lifts, ‘The Lake’s legacy lives on

LAKE LOUISE - Back in the “old days,” as in the late 1800s, when travelling by train was the hip way for the European elite to experience the Canadian wilds, the village now known as Lake Louise was the ultimate destination.

For years people would come to stand in awe of the breathtaking scenes of giant glaciers, emerald green lakes and deep powdery snow. As the years rolled into the next century, Swiss guides introduced the hardiest travellers to ski mountaineering. Long wooden skis, leather boots and heavy woolen clothes were the gear of the day.

By 1931, Skoki Lodge, some 11 kilometres from the Lake Louise Ski Resort boundary, was visited by many of the wealthiest and most refined clientele from Europe. The bountiful snow they were experiencing had to be shared.

Skiing at Skoki Lodge in the early days.
Photo by the Whyte Museum

The local Banff ski club and some of the Europeans went to work to create a Canadian version of the skiing meccas of Europe. In 1938, Temple Lodge was constructed for the ski mountaineers to use. By the winter of 1952 the first 150 metre-long rope tow lift was installed behind Temple and replaced with a Poma lift two seasons later. Down in the front valley, a gondola operated by another company started taking guests to the top of Whitehorn Mountain in 1957. Lifts and lodges were added to both slopes and finally amalgamated as the Lake Louise Ski Resort in 1971.

The next two decades saw big changes, including the ownership of the resort. Charlie Locke purchased the resort in 1981 and instantly increased its capacity by adding the Paradise Chair, The Friendly Giant and Top of the World detachable chairs. New runs were cut through the trees and snowmaking machines were added to fill in the rough patches.

It was good times at Lake Louise. Albertan’s flocked to the resort as did travellers from around the world. While Calgarians did the pilgrimage from home, the national and international visitors enjoyed the comforts of hotels in Lake Louise Village and the town of Banff.

Charlie Locke purchased the resort in the 80s.
Photo by Chic Scott

Under the banner of Resorts of the Canadian Rockies (RCR), Locke’s collection of ski resorts expanded to eight across the country. In 2003, Locke thought he wanted to retire and sold the entire company. Retirement didn’t suit him and he yearned to be back in the business he loved. So, five years later he bought back Lake Louise Ski Resort to run with his two daughters.

The growth of “The Lake” continues and is still adding to the excitement.

High-speed chairlifts replaced the slower chairs to almost eliminate lift lines. With four mountain faces hosting 139 marked runs and back bowls, a tube park and an adrenaline-pumping terrain park there is never a dull moment. Every level of skiing or snowboarding enthusiast can find plenty of enjoyment on over 4,200 acres of accessible terrain. The Grizzly Express Gondola added in 2004 sweeps 1,670 people per hour from the base to the top of Ptarmigan to one of the best views in the world in the winter and summer months. It’s impossible to not just stand there and drink in that view before setting off on another adventure. Yes, it’s a “WOW” moment.

The winter ski season is one of the longest and Lake Louise kicks it off with World Cup Downhill Races at the end of November. Almost every weekend until May there are special activities, races, events but daily dustings or heaps of powder entice snow hounds daily.

The men's and women's world cup downhill races are a big attraction at the resort.
Photo by Chris Moseley

Kick back at the Kabin

Dining or grabbing a snack is easy with restaurants, cafeterias, gazebos and decks to pull up a chair. Check out the rustic charm of the old Temple Lodge on the backside for lunch. If it’s mid-winter, après ski has to be next to the fire in the Powderkeg Lounge in The Lodge of Ten Peaks but come springtime - the deck at the Kokanee Kabin is the place to work on the goggle tan while enjoying a pint and listening to live music.

Relax at the Kabin!
Photo by the Lake Louise Ski Resort

From the days of lace-up ski boots to today, Lake Louise Ski Resort has always been rated as one of the world’s best ski resorts. The staff and ownership appreciate being among the best and continue to improve the resort while respecting Banff National Park and the UNESCO World Heritage site they are a part of.

For more information about, head to the official Lake Louise website

Learn about Nakiska, where the Olympic flame still burns at the family-friendly, ski-racing hub.

Show your stoke for the awesome history of Lake Louise by sharing this page with your friends! 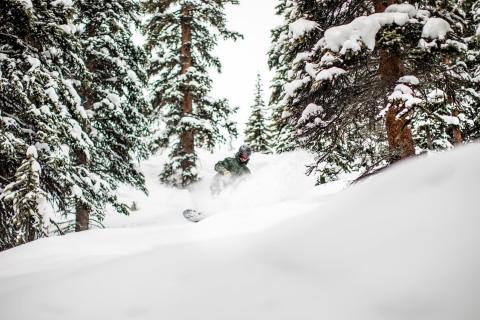 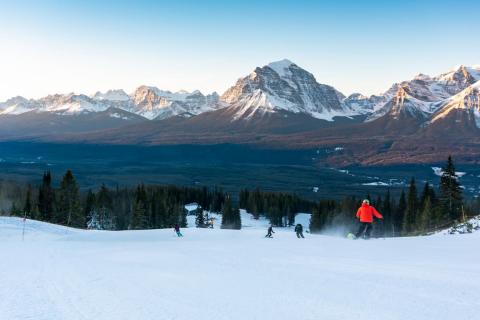 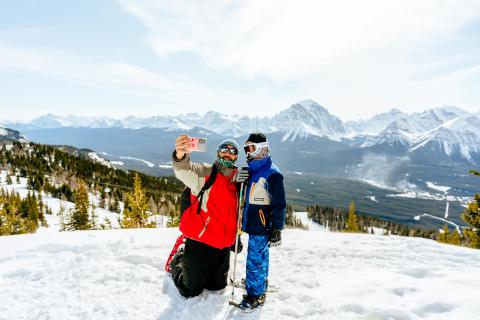 The stunning beauty of Lake Louise Ski Resort was nearly enough to put Gurusewak Kaur at ease for... 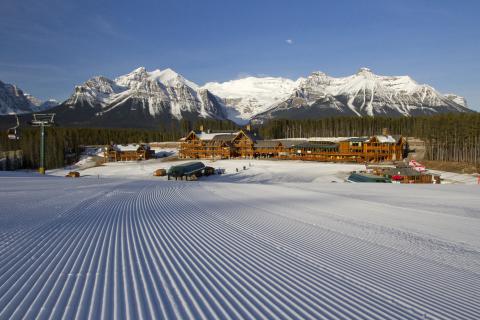 Ski into History on Earliest Opening Ever at Lake Louise

As we have all experienced over the past two weeks, winter has arrived and shows no signs of... 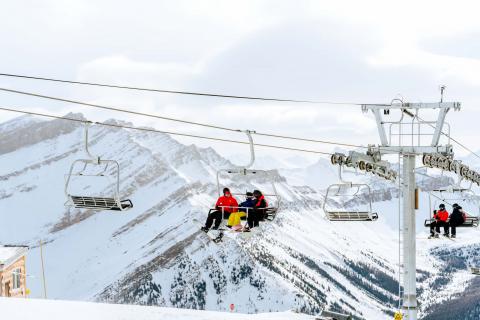 From newbie to gnarly: Rider hits her stride on the slopes

Genie Wong gives big kudos to an aunt and uncle for introducing her to snowboarding and as a result...