Her name is Gibson. And when her wet nose burst through the snow to grab the frozen wool sweater clutched in the arms of the buried avalanche “victim,” it was a very welcomed sight.

“I could hear her moving around over me, and then she left. The sound is very muffled under the snow, so I didn’t know what was happening. When she came back and started to dig, I knew she found me for real, so I started to praise her and then she dug like crazy. She pulled the sweater so hard, I had no choice but to be dragged out of the cave,” said Bonnie Wearmouth, a caving enthusiast who played victim for the morning.

While Wearmouth dusted off the snow, Gibson was praised like, well, like she had just rescued a buried person.

Our day started by meeting Gibson (4) and her handler Kyle Hale, and Brooke (8) and her handler, Adam Sherriff at the gondola at Kicking Horse Mountain Resort near Golden BC. While Brooke focused on chewing her ball, Gibson watched intently out the back window as we drifted to the summit under a bluebird sky. 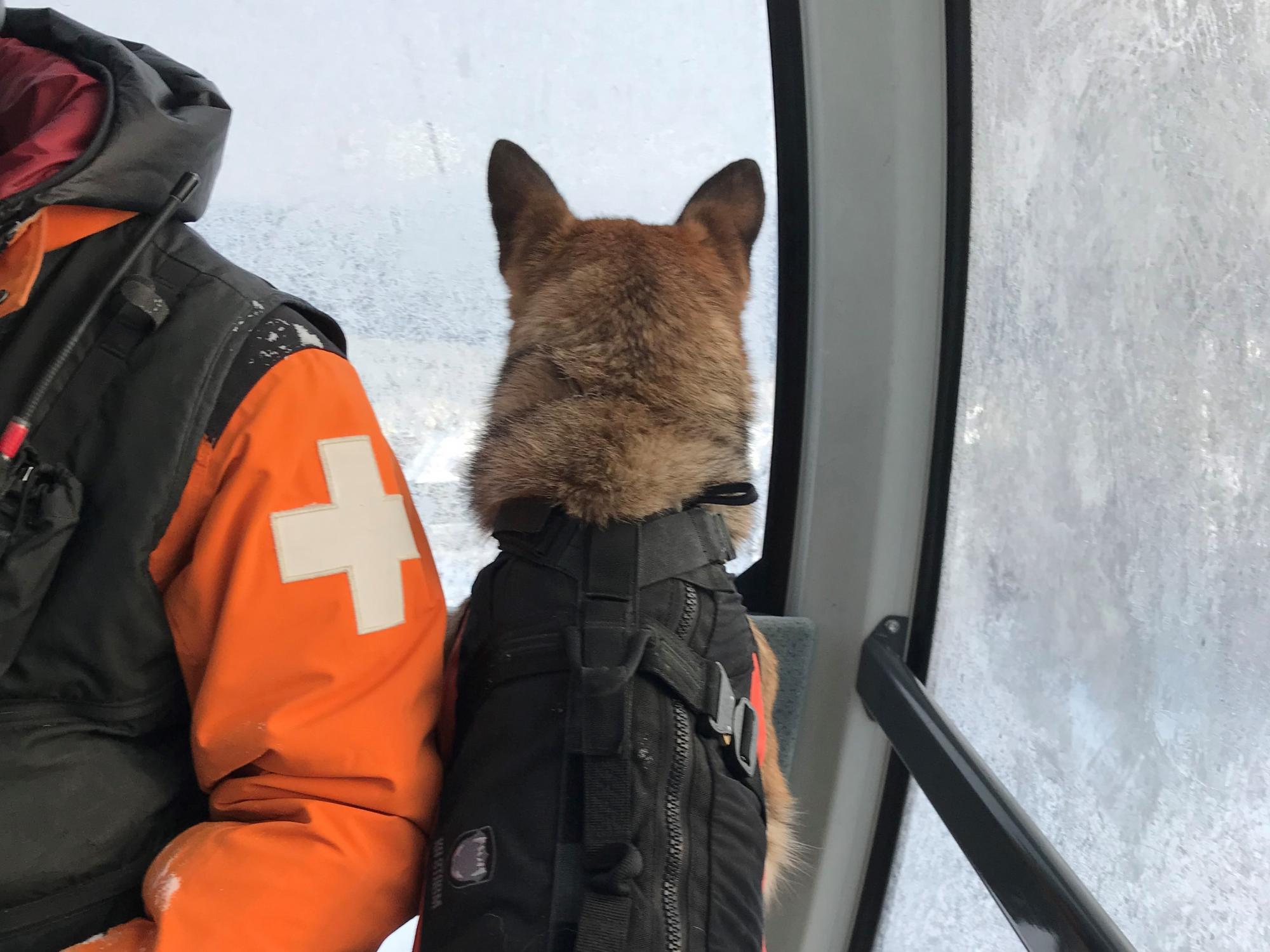 Gibson on the way to work at Kicking Horse Mountain Resort.

Both men are members of the Kicking Horse Patrol Safety Team, and volunteer members of the Canadian Avalanche Rescue Dog Association (CARDA). Currently all 25 validated teams reside in Alberta and B.C.

As we rode to the top we found out while it looks like fun with all the games and praise, it’s a hard job that they all take seriously.

It starts before you even get the dog. You need a breed that works well in harsh environments and has a strong hunt, retrieve and praise drive. Sporting breeds like Labs, Goldens, Shepards, Border Collies and Duck Tollers work best. Puppies that pass a Volhard style Puppy Aptitude Test at only 49 days old are good candidates to move forward with the training.

It takes about two solid years of training and testing to get to wear the CARDA badge with yearly training to keep that validation current. Classes including basic obedience, scent differentiation, search techniques and handling social situations. Let’s not forget the dogs also have to learn to run between the handler’s legs as they snow-plow down the run or better yet; learn to ride on his shoulders. They need to ride a chair lift, a snowmobile, and in OR, dangling under a helicopter. Meanwhile, the handler has to be a member of a search and rescue team, be certified in avalanche awareness and first aid – annually. 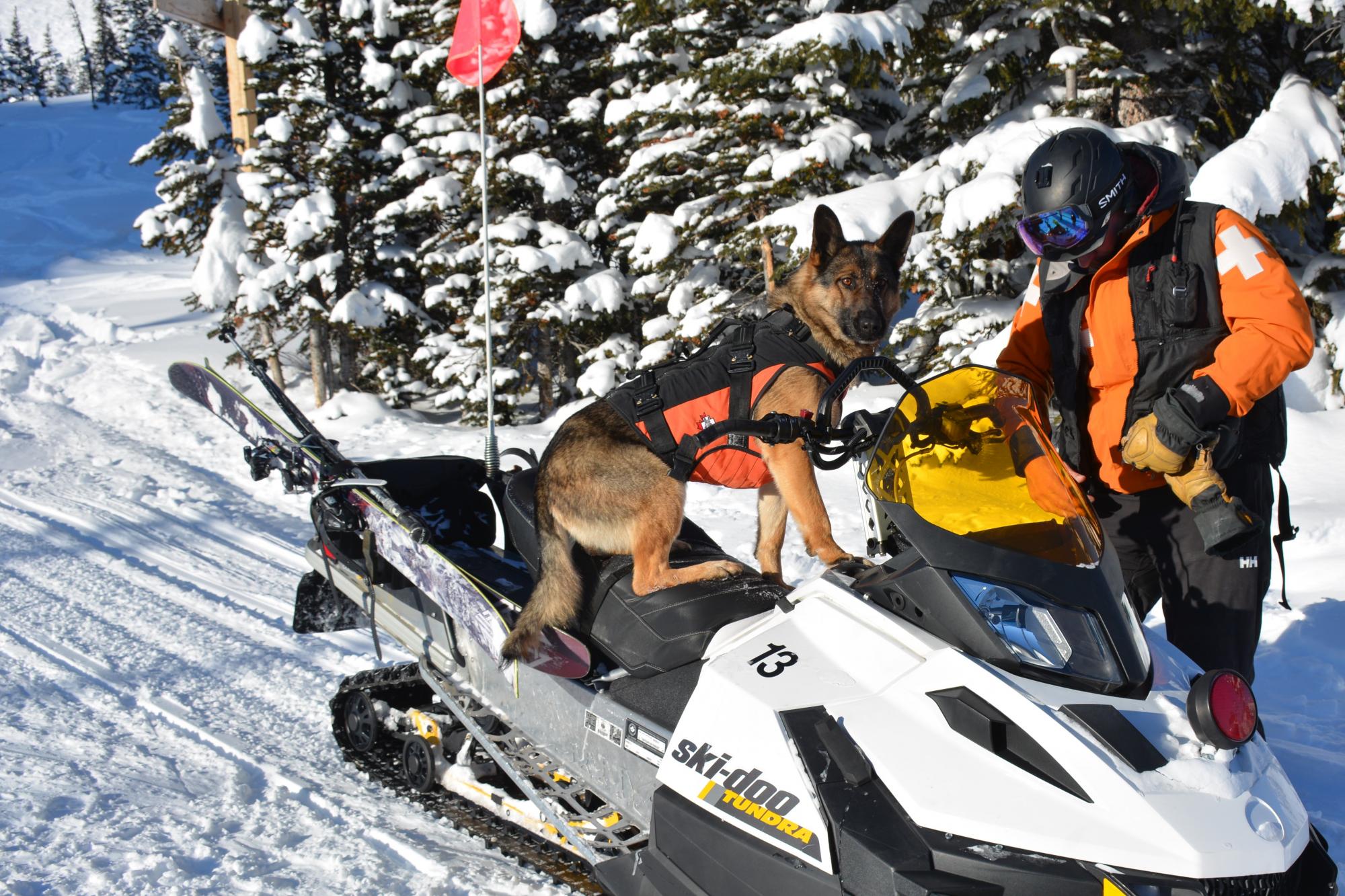 Avalanche dogs have to be comfortable riding snowmobiles, chairlifts and helicopters.

“We start the training with run aways,” says Sherriff as he kicks the ball back to Brooke. “I’d run away and hide while someone held my dog. She’d pursue me by following my scent. Then I’d hide in a snow cave, then hide in one of many caves. The difficulty increases when we introduce other people as the run aways. Its all about getting them to learn to use their nose. Whenever they find us it’s a big game as the reward.”

Hale who is lead patroller at the resort, as well as the Emergency Program Manager for the town of Golden and surrounding area, adds, “The reality is we don’t have a lot of avalanches where people are caught in them in Canada. But we do have a lot of avalanches that need to be checked. When an avalanche is called in and there are tracks leading into the debris, we use transceivers first. Then we bring the dogs in to sweep. I can send Gibson in for 20 minutes in a high-risk area instead of risking the lives of 20 people with probes for four hours.”

When we got to the top of the mountain, the dogs leapt from the gondola. Brooke quickly assumed her position behind Sherriff; barking and bawling with excitement as they bolted to our perfect powdery test patch in Crystal Bowl.

The dogs were tethered to a tree while the handlers hid the sweaters. Brooke, still barking, watched Sherriff’s every move but had no idea where Hale was hiding his prey at least 100 metres down the slope.

On command Brooke bolted towards where the first sweater was buried. Her nose dragged through the snow following Sherriff’s scent, then she circled around, back and forth where the scent was heaviest. Like a wolf after a mouse her feet and head went into the snow. Powder flew and so did the sweater. Heaps of praise and a short game of tug-of-war let her know she was a good dog. But then Sherriff got serious again and commanded her to, “Search!”

Game on! Her nose went down, back and forth, back and forth, moving swiftly down the mountain. We honestly couldn’t remember exactly where the sweater was, so it really was up to her to find it. A few 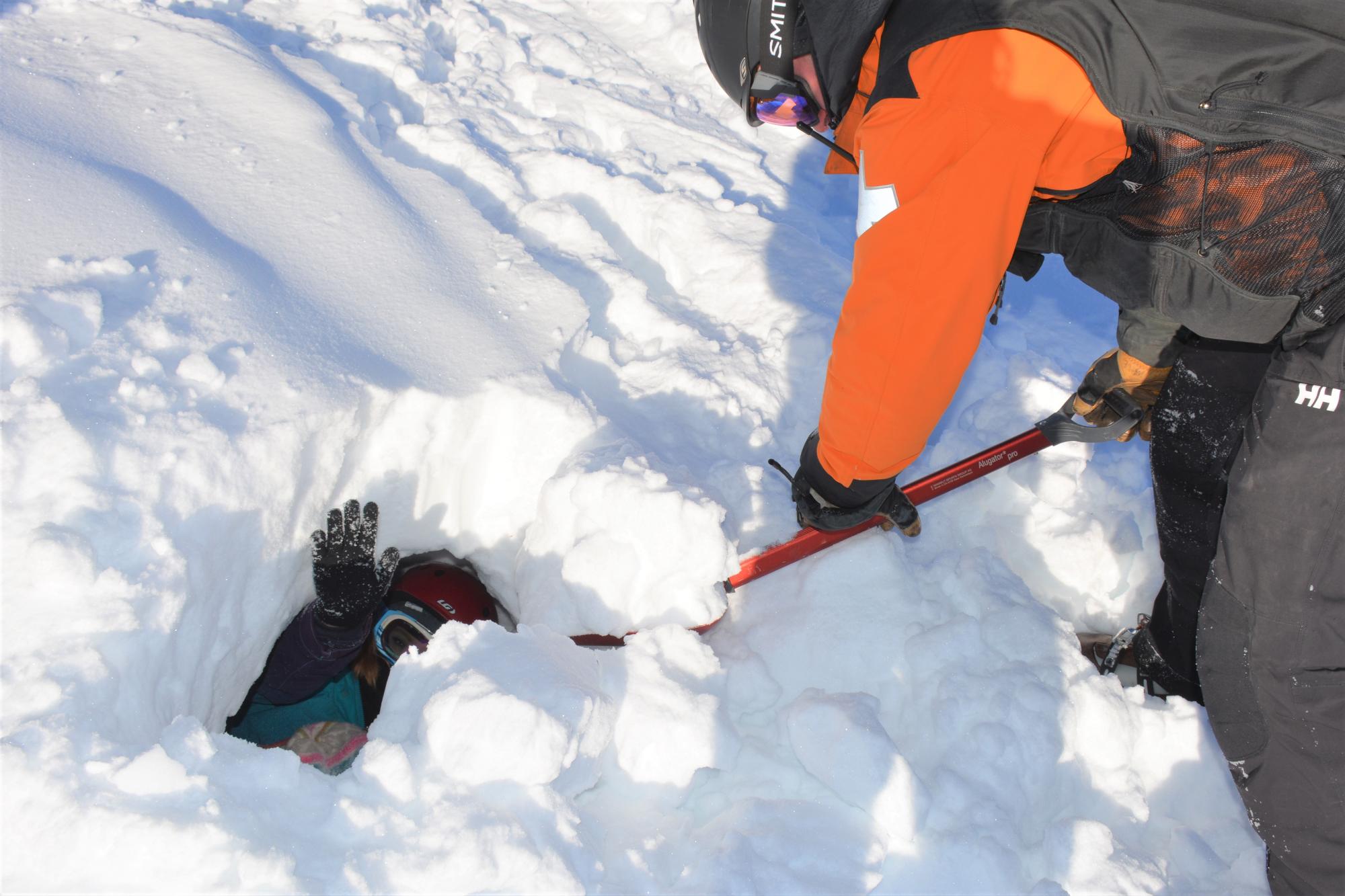 Bonnie Wearmouth waves as Kyle Hale buries her as part of the avalanche dog rescue demo.

While we watched Brooke seek out the sweater, Hale dug a cave big enough for our “quarry.” Wearmouth settled in with the other sweater and Hale loaded blocks of snow over her to completely conceal her. A few minutes later, Gibson was released with a, “Gibson, search!”

The dog bound through the snow, gleefully picking up scents, mentally tossing the surface scents left by the handlers and other skiers and focused on finding the buried scent. The concept that you need to offer the dog a scent from a victims clothing is all Hollywood says Hale. Avalanche dogs don’t have the luxury of going through your sock drawer prior to a rescue. Both Brooke and Gibson can locate scents buried under more than 70 cm of snow left for 24 hours.

Wearmouth was only buried for a few minutes. We watched as Gibson hunted through the snow. On that first pass when she missed finding her prey, Hale quietly watched and never gave her a hint. When Gibson did the two-paw pounce and crash into the cave to yank out the coveted sweater, she didn’t care that someone came out with it. All she cared about was winning the game.

“Even though I knew I was going to be found, I was still very relieved to see her.” 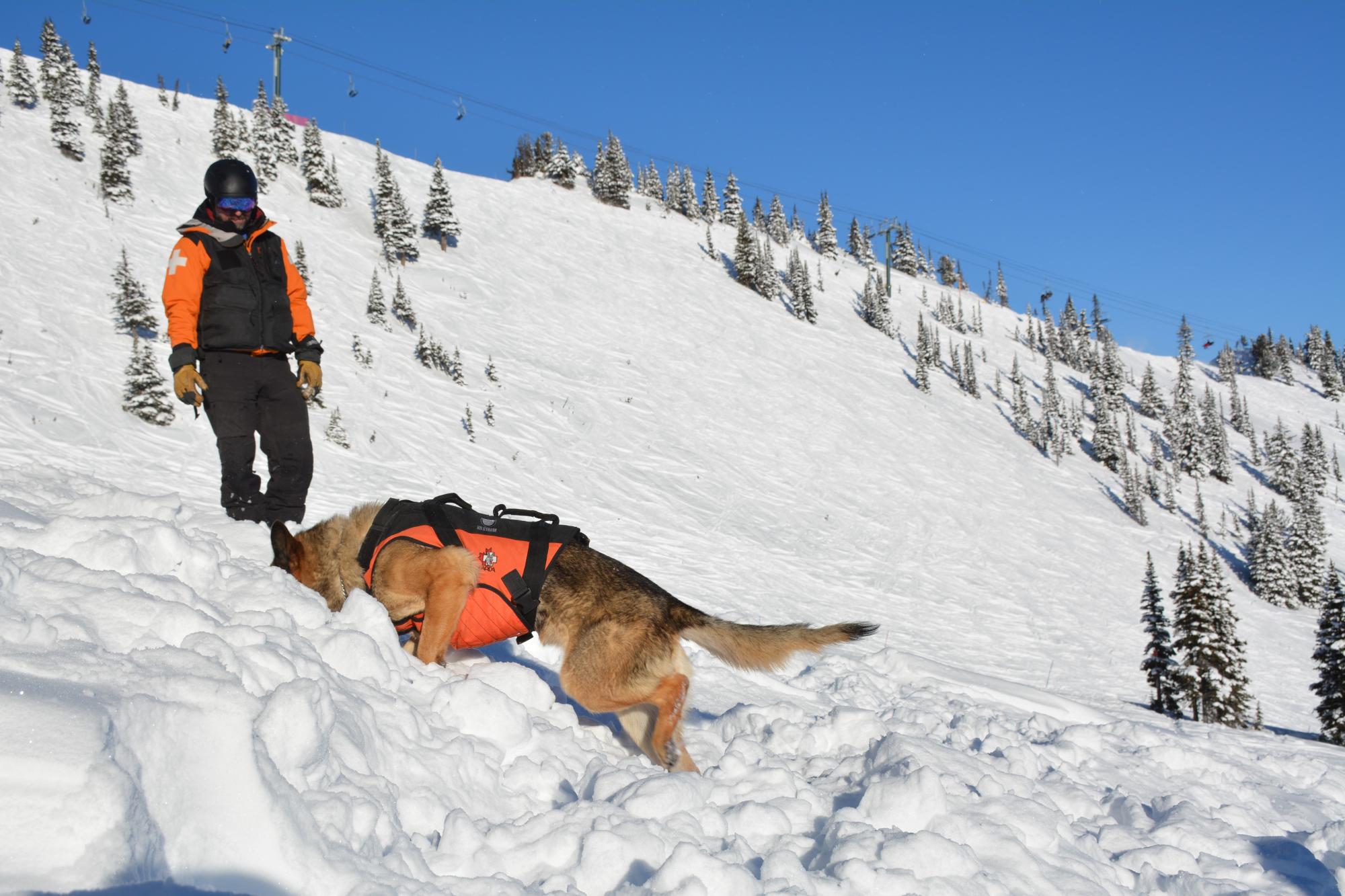 Only one avalanche victim in Canada has been found alive to-date by avalanche dogs and that was at Fernie Alpine Resort in 2000. But countless stranded skiers and lost hikers have been found by the four-legged super-sniffers. 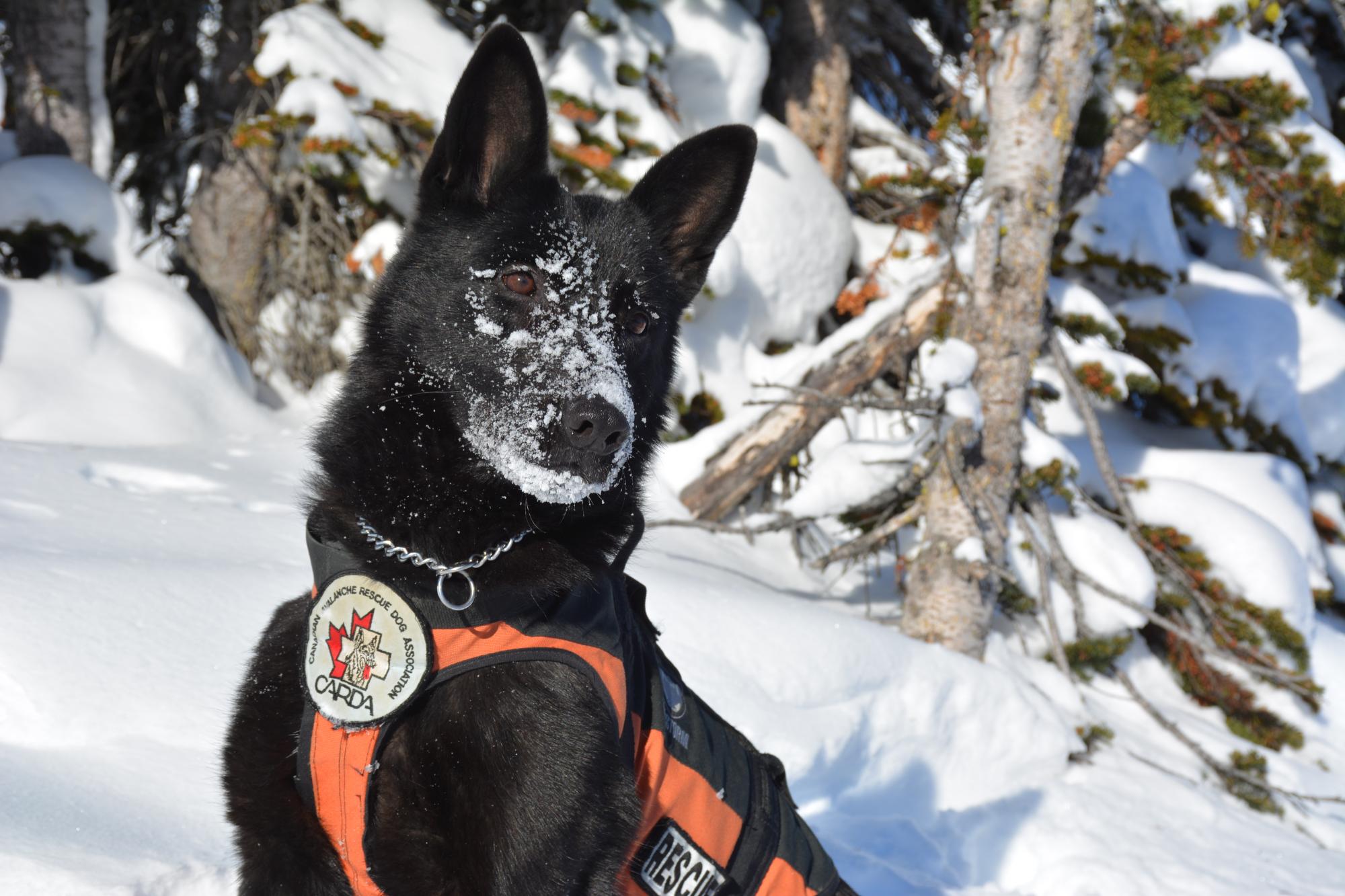 Brooke, ready for another adventure.

Statistically speaking, if you are buried in an avalanche your chances of survival drop with every minute you are buried. Wearing a beacon is your best chance of being found fast. If your buddy saw you go under, in the first 18 minutes, you’ve got a 91% chance of survival (depending on injuries) and by 30 minutes, your chances drop to 30%. If a CARDA dog is nearby, he/she truly is your best friend.

Stay connected this season on everything winter, please sign up for our SnowSeekers e-news