Have you mastered the skis but have always wanted to try snowboarding? Are you a boarder but want to get into skiing? What about leveling up your current skill in either sport?

Here at SnowSeekers, we want to inspire you to level up and enjoy winter with one of our favourite pastimes.

Welcome to the #SnowSeekersGiveaway to level up your 2021.

You could win lift tickets, lessons and rentals for two to any close-to-home mountain in BC or Alberta.

So take a trip down memory lane or get the camera out this week and capture a #SnowSeekersGiveaway moment. Let us know what you want to level up this year.

Given current travel restrictions, this prize will be redeemable at your local ski hill.  Soon it will be right for us to travel across Alberta and BC, but for now, we want you to LEVEL UP close to home! 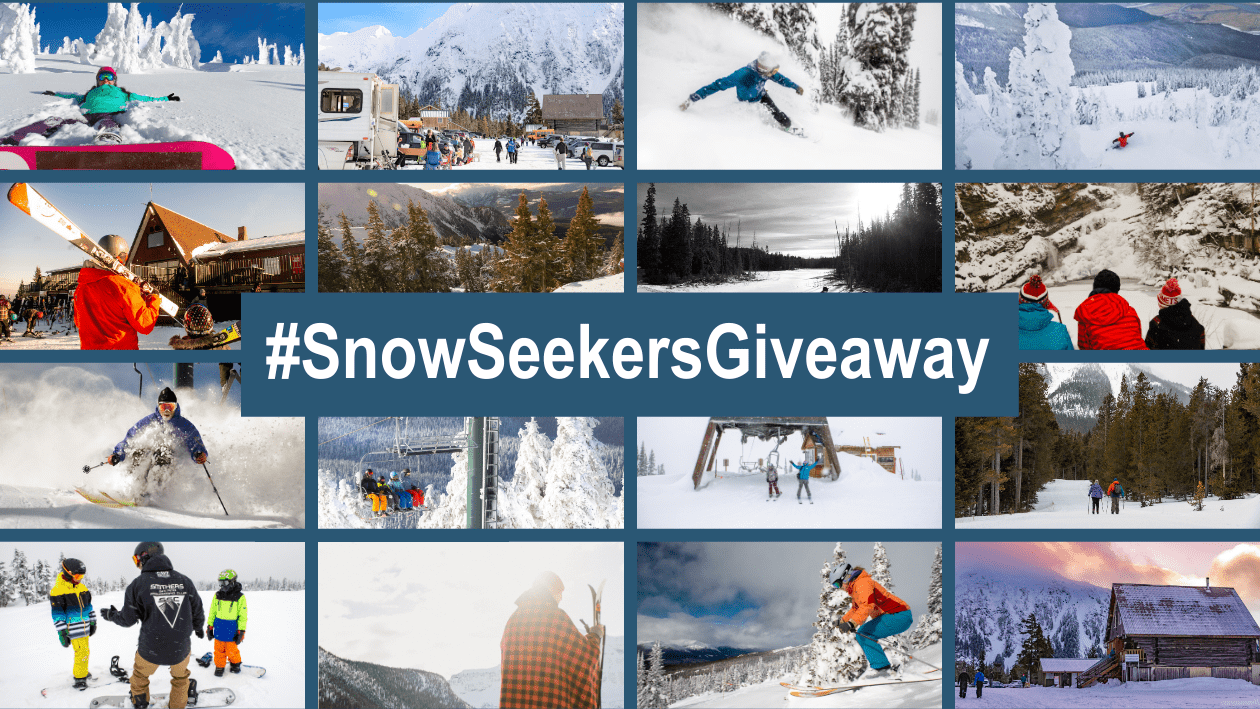 Each step you complete gives you another entry!

2. Make sure you're part the SnowSeekers crew on social media. You'll find extra ways to win here too!

We will announce the winner on Social Media on Tuesday, February 16th, 2020, so check in with @SnowSeekers on the day to see if you've won!

Put a reminder in your Calendar.

3. Sign up or reconfirm your subscription to SnowSeekers' newsletter

Ski or snowboard lessons, equipment rentals, and lift passes for two for a resort or club offering these services in BC or Alberta in the 2021 winter season. This prize will be awarded by random draw to one contestant who meets the contest requirements.

The winner will be announced on Tuesday, February 16th, on SnowSeekers' social media channels.

The named winner will have 48 hours to contact SnowSeekers to confirm their win.

If no contact is made with the winner within 48 hours, a new winner will be drawn.

This prize is to be redeemed by April 1, 2021 and is not transferable to next season.

ALL FEDERAL, PROVINCIAL, LOCAL AND MUNICIPAL LAWS AND REGULATIONS APPLY. VOID WHERE PROHIBITED.

#SnowSeekersGiveaway is open to legal residents of Canada and the United States (Quebec and Puerto Rico excluded) who are at least eighteen (18) years of age at the time of entry and currently reside in Alberta of British Columbia. This contest is open to new and current followers of @SnowSeekers social media channels and SnowSeekers' newsletter. Employees of Seekers Media and other companies associated with the promotion of the Contest, and their respective parents, subsidiaries, affiliates and advertising and promotion agencies, as well as immediate family (spouse, parents, siblings and children) and household members of each such employee, are not eligible. The Contest is subject to federal, provincial and local laws and regulations.

Participation in this Contest constitutes entrants full and unconditional agreement to and acceptance of these Official Rules, which are final and binding. Winning a prize is contingent on being compliant with these Official Rules and fulfilling all other requirements so forth herein.

The Contest begins on January 27th, 2021 at 12 p.m. PST and ends on February 15, 2021, at 11:59 p.m. PST (the Contest Period). Entries that are submitted before or after the Contest Period will be disqualified. Submissions will be accepted for the duration of the Contest.

In the event that the operation, security or administration of the Contest is impaired in any way for any reason, including but not limited to fraud, virus, bug, worm, unauthorized human intervention or other technical problem, or in the Contest is unable to run as planned for any other reason, as determined by the Sponsor in its sole discretion, the Sponsor may, in its sole discretion,  either (a) suspend the Contest to address the impairment and then resume the Contest in a manner that best conforms to the spirit of these Official Rules or (b) terminate the Contest and, in the event of termination, award the prize at random from among the eligible, non-suspect entries received up to the time of the impairment. The Sponsor reserves the right in its sole discretion to disqualify any individual it finds to be tampering with the entry process or the operation of the Contest or to be acting in violation of these Official Rules or in an unsportsmanlike or disruptive manner. Any attempt by any person to damage the website or undermine the legitimate operations of the Contest may be in violation of criminal and civil law and, should such an attempt be made, the Sponsor reserves the right to damages (including attorney fees) and any other remedies for any such person to the fullest extent permitted by law. Failure by the Sponsor to enforce any provision of these Official Rules shall not constitute a waiver of that provision.

5. Release and Limitations of Liability

By participating in the Contest, entrants agree to release and hold harmless the Sponsor, and each of their parents, subsidiaries, affiliates, advertising and promotion agencies, other companies associated with the Contest, and each of their respective officers, directors, employees, shareholders, representatives, and agents (Released Parties) from and against any claim of cause of action arising out of participation in the Contest or receipt or use of the prize (including any travel or activity related thereto), including, but not limited to: (a) any technical errors associated with the Contest, including lost, interrupted or unavailable Internet Service Provider (ISP), network, server, wireless service provider, or other connections, availability or accessibility or miscommunications or failed computer, satellite, telephone, cellular, tower or cable transmissions, lines or technical failure or jumbled, scrambled, delayed, or misdirected transmissions or computer hardware or software malfunctions, failures or difficulties; (b) unauthorized human intervention in the Contest; (c) mechanical, network, electronic, computer, human, printing or typographical errors; (d) application downloads; (e) any other errors or problems in connection with the Contest, including , without limitation, errors that may occur in the administration of the Contest, the announcement of the winner, the cancellation or postponement of the event and/or the flyover, if applicable, the incorrect downloading of the application or the processing of downloaded entries in any contest-related materials; or (f) injury, death, losses or damages of any kind, to persons or property which may be caused, directly or indirectly, in whole or part, from entrants participation in the Contest or acceptance, receipt or misuse of the prize (including any travel or activity related thereto). Entrant further agrees that in any case of action, the Released Parties liability will be limited to the cost of entering and participating in the Contest, and in no event shall the entrant be entitled to receive attorney's fees. Released Parties are also not responsible for any incorrect or inaccurate information, whether caused by site users, tampering, hacking, or by equipment or programming associated with or utilized in the Contest. Entrant waives the rights to claim any damages whatsoever, including, but not limited to, punitive, consequential, direct or indirect damages.

Except where prohibited, each entrant agrees that any and all disputes, claims and causes of action arising out of, or connected with, the Contest or any prize awarded shall be resolved individually, without resort to any kind of class action, and exclusively by the appropriate court. All issues and questions concerning the construction, validity, interpretation and enforceability of these Official Rules, entrants rights and obligations, or the rights and obligations of the Sponsor in connection with the Contest, shall be governed by, and construed in accordance with the laws of Alberta and BC without giving effect to any choice of law or conflict of law rules, which would cause the application of the laws of any jurisdiction other than Alberta or BC.